To share your memory on the wall of Wilfred Bessette, sign in using one of the following options:

He was born on June 18, 1930 in Burlington, VT. He was employed for 44 years at the UVM Given Medical Build... Read More
Wilfred L. Bessette, Jr, age 90, passed away on Thursday December 10, 2020 at the Green Mountain Nursing Home in Colchester, VT .

He was born on June 18, 1930 in Burlington, VT. He was employed for 44 years at the UVM Given Medical Building as manager for the Department of ACF. He served in the United States Airforce during the Korean Conflict in 1951 and 1952 with the Vermont Air National Guard. He was at Fort Ethan Allen Airforce Base in Colchester, Vermont for 8 years. He was a member of the the American Legion Post #91 in Colchester, Vermont.

Wilfred is survived by his companion Yvette Blair of Essex Jct, VT and their beloved dog Precious who was his best friend, stepdaughter Louise Lamotte and spouse Tray Lamotte of St. Albans, Vermont. He is also survived by his and Betty's daughters Faye Marie Bessette, Judy Ann Smith, Ann Marie Bessette and Leslie Marie Bowley and many loving grandchildren and great-grandchildren, He was preceded by Mother Myrtle Mae Greenwood King, Father Wilfred Leo Bessette, Step Father Leo Robert King and spouse Betty Ann Grenier Bessette married from 1956 until her passing in 1990

A Graveside Service and burial will be held at Resurrection Park Cemetery, 200 Hinesburg Rd, South Burlington at 11:00AM on Tuesday December 15, 2020. Arrangements are under the care of LaVigne Funeral Home and Cremation Service.
Read Less

We encourage you to share your most beloved memories of Wilfred here, so that the family and other loved ones can always see it. You can upload cherished photographs, or share your favorite stories, and can even comment on those shared by others. 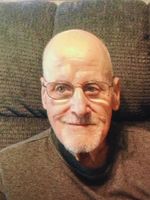