To share your memory on the wall of Rene Klopfstein, sign in using one of the following options:

Your condolence has been submitted for approval. There may be a delay before posting.

Print
It is with great sadness that the family of Rene Klopfstein announce his peaceful passing on September 27th at the age of 95 years.

He will be lovingly remembered by his wife of 67 years, Marcelle; children and spouses: Richard and Susan... Read More
It is with great sadness that the family of Rene Klopfstein announce his peaceful passing on September 27th at the age of 95 years.

He will be lovingly remembered by his wife of 67 years, Marcelle; children and spouses: Richard and Susan, Daniel and Tom; grandchildren: John, Trevor, James, and Ray; and extended family in America and Switzerland; and many friends and patrons.

Rene was predeceased by his parents Ulisse and Sophie, sister Lydia and brothers Marcel and Hermann.

He was born in Laupen (Canton Bern), Switzerland in 1925. The Klopfsteins are one of seven founding families of Laupen, dating back to the 14th century, of which Rene was very proud of his heritage. His father’s untimely death in 1935, when Rene was 10 years old, propelled the family into severe hardship which shaped Rene’s dedication to his profession, passionate determination, and entrepreneurial spirit. At an early age of 16 he apprenticed as a butcher, moving to Bern and later Basel, Switzerland. He met the love of his life Marcelle in her hometown of St. Ursanne. With son Richard born in 1956, Rene and Marcelle immigrated to Fresno, California in 1959. Son Daniel was born in 1961 and they lived as active citizens in Fresno for 61 years. Rene and Marcelle loved to entertain and thoroughly enjoyed the company of their American and European friends and their families.

Rene’s restaurateur profession commenced in 1964 when he joined Perry Boys Smorgy, a Central California restaurant group. He was rapidly promoted to executive chef where Rene managed eight city locations. In 1970 Rene commenced his entrepreneurship in opening the Swiss Bavarian House, a 600 seat restaurant with banquet facilities. Later he opened two Rene’s Restaurants, both fine dining establishments. Like a master painter with an easel, Rene’s gift for food creations were novel for Fresno and highly acclaimed. After “retiring” from successfully owning and operating three restaurants together with Marcelle as the consummate hostess, in 1995 Rene was hired as chef consultant for the opening of four more restaurants until his official retirement at 75!

Rene and Marcelle enjoyed traveling to the San Francisco and Orange County regions on many occasions to visit their sons and families including the blessings and joy of four grandsons. Reading, gardening, cooking (naturally), dining out, and celebrations with his close group of friends were his passions throughout his life.

In early 2018 Rene and Marcelle moved to Shelburne, Vermont to be closer to their sons and families. Marcelle, Richard and Daniel, and family gratefully thank the staff of the Residence at Shelburne Bay Retirement Community and Reflections Memory Care, and the Bayada Home Health Care for their expertise, kindness and compassionate care for Rene.
Read Less

We encourage you to share your most beloved memories of Rene here, so that the family and other loved ones can always see it. You can upload cherished photographs, or share your favorite stories, and can even comment on those shared by others.

Posted Oct 12, 2020 at 08:08pm
Our condolences from the Tomassian Family for Rene's passing. May God bless your family and provide comfort during this difficult time. May Rene have eternal peace in Heaven with the Father. We miss seeing you and appreciate and value the years of friendship between our families. Rene was a strong, loyal, dedicated and determined man who had a good and well lived life and left behind his loving family. Our heartful thoughts and prayers. The Tomassian Family.
Comment Share
Share via:
OB

Posted Oct 04, 2020 at 11:59pm
Dear Aunt Marcelle, cousins Richard and Daniel, Susan, Tom, Trevor, James, John and Ray - since the 60's we have had fond memories of Rene, his devotion to his wife, children and grandchildren, his dedication to hard work from a very young age in the culinary art as a master chef. Many family reunions, baptisms, marriages, funerals and anniversaries have allowed us to meet you all again - picnics at la Vue des Alpes or cruises on the Lake Leman in Switzerland - parties at Dolores or amazing meals at Rene's w/ hors d'oeuvres, escargots, wiener schnitzel, tournedos Rossini and all type of desserts, a true culinary treat - we will remember his grand stature, straight, his strong and large hands with a solid handshake, his quiet personality, his great knowledge of food and the art of hospitality in general, his passion for history and genealogy and his communicative high pitch laugh... loved it...

Today, we miss you as you are not with us however we know that you are among the stars, cooking with other chefs amazing recipes - a feast in heaven. Rejoice Rene and see you one day to sit at your table and enjoy your presence again.

May our love comfort y'all - Marcelle, Richard, Daniel & your families.

Posted Oct 02, 2020 at 04:10pm
Cathy and I are saddened by this news! We were blessed to know this wonderful couple as customers for many years! We frequented each other's restaurants often! Rene was instrumental in the launching and success of our Manhattan restaurant! Our deepest condolences to all who knew and loved him! May his memory be eternal!!🙏🏻🙏🏻🙏🏻🙏🏻
Comment Share
Share via:
PJ

Posted Sep 30, 2020 at 05:44pm
I met Rene in 1988 when he provided the delicious and memorable horderves at Rich's grand opening of his CPA practice in Orange County, California. He was entertaining and personable. I learned of his Swiss background and felt from him the pride and integrity of his culture. He was a good and well loved father; I see that in the virtues adopted by his son Rich. During my three decades of friendship with Rich I kept up with the progress and moves of Rene and Marcelle through our annual conversations and meetings at sushi restaurants and other fine establishments. I plan to go to Laupen Switzerland with Rich next year to visit his roots.
Mögen Erinnerungen an Rene und die Liebe zur Familie Sie umgeben und Ihnen in den kommenden Tagen Kraft und Frieden geben.
Philip St. John
Berlin

Posted Sep 30, 2020 at 05:25pm
Sending much love to our dear former neighbors Rich, Sue, Trevor & James as well as the entire extended Klopfstein family. I will never forget Rene’s stoic yet friendly kindness towards us, and his dedication to being a part of his sons’ and grandsons’ lives. I am honored to have known him, seen his “old-world” talents in action, and get to admire that stunning head of hair! He lived a full life for sure...but a passing is so finite and painful for the family nonetheless. Sending virtual hugs to you all! Mmmwwwaaaa!
All our love,
Marianne and the Perkins Family
Comment Share
Share via: 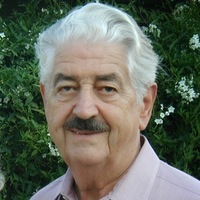 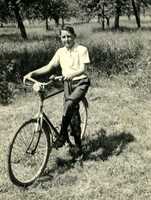 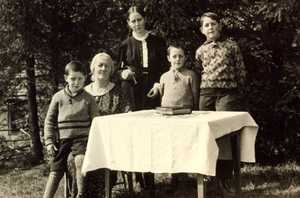