To share your memory on the wall of Raymond Doherty, sign in using one of the following options:

We encourage you to share your most beloved memories of Raymond here, so that the family and other loved ones can always see it. You can upload cherished photographs, or share your favorite stories, and can even comment on those shared by others.

Posted Jun 15, 2021 at 04:33pm
Our deepest sympathies to Father Doherty's family and the Edmundite community. May this fine man rest in peace.
Comment Share
Share via:
TC

Posted Jun 12, 2021 at 10:33am
My brother Mark and I attended SMC and I have very fond memories of Fr. Ray. He was a kind person who knew everyone on campus. He will be greatly missed! 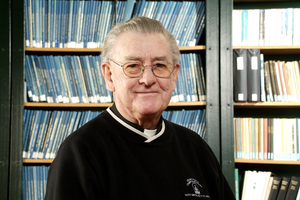