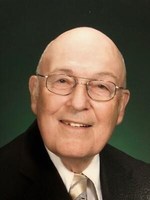 Paul Odilon Pouliot, 87 of So. Burlington, passed peacefully on Saturday, December 26, 2020 at the Gazebo's in So. Burlington to be with Noella and his Lord.

Paul was born in Colchester, VT on August 4, 1933, the son of the late Irene Potvin and Josephat Pouliot of Westford, VT. He attended Cathedral High School in Burlington, VT. Paul married Noella DeForge at St. Francis Xavier church in Winooski, VT on July 17, 1954. He worked most of his life at IBM as a Facilities Repairman, starting in 1965 until his retirement in the late 80's.

Paul was preceded in death by his wife of almost 50 years, Noella, in 2004. His brother, Harold Pouliot passed away in 1967.

Paul had certain life-long values that he truly believed in; faith, family and hard work. He always set the example of those values to his family and friends. Paul was a very active member of St. John Vianney's Church in So. Burlington, VT. He was a member of the Knights of Columbus and was involved in many of their functions and duties. He was a Eucharistic Minister for many years, and would visit the sick and elderly to talk with them and to bring them Holy Communion.

Paul had many interests and hobbies that he enjoyed. He loved to hunt and fish, as well as gardening and playing horseshoes. Other interests included shooting pool, bowling, attending fiddler's meets, dancing and building various items in his woodworking shop. Cards were a big part of his life, and his family all became card players as well. He and Noella would always have a cribbage game going if no one else was around, and they kept track of how many games each of them had won for a whole year! Loser had to pay for a night out on the town.

Paul always enjoyed spending time with his family and would always want to keep the family together as much as possible. Whether for a meal and some card games, attending his grandchildren's sporting or other school events, or attending a family reunion. For many years, he was to one to organize a Pouliot Family Reunion, where up to 100 people would gather to eat, talk, tell stories and just enjoy the day. He's a role model for many of us and will be a tough act to follow.

The family would like to thank Dr. Peter Gunther, Dad's physician for many years for all of the care that he gave Paul. We also would like to thank the staff at the Gazebo's in So. Burlington. Paul was a resident there for the last year. He received excellent care and we thank you for being there for Dad.

Mass of Christian Burial will be held at 11:00 on January 4th at St. John Vianney's in So. Burlington. Due to the Pandemic, the services will be for family members and close friends only. You will be able to view the service by linking to the live stream https://www.stjohnvianneyvt.org/live0104 . The burial will immediately follow at Resurrection Park in So. Burlington. In lieu of flowers, donations may be made in Paul's memory to: St. Anne's Shrine, 92 St. Anne's Road, Isle la Motte, VT 05463 or The Covenant House, 550 10th Avenue, New York, NY 10018.

Those wishing to express online condolences may do so at:www.lavignefuneralhome.com. Arrangements are under the care of LaVIgne Funeral Home and Cremation Service.