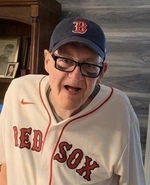 Michael John Moody – It is with deep sorrow that we announce the peaceful passing of Michael John Moody, 69, at the McClure Miller Respite House on February 17, 2022. As he was in life, Michael was surrounded by the love of family members at the time of his passing.

Known affectionately as Michael John by many family members, he was born in Burlington on June 30, 1952, the son of James W. Moody, Sr. and Rose I. (Vezina) Moody. As the youngest of nine siblings, Michael was one of two sons. He spent much of his life being “mothered” by seven sisters, and in his later years, by many nieces and nephews. Whether it was the love of family or friends, Michael basked in being the center of attention. After all, he was the baby of the family and isn’t that the role of the baby?

Michael spent most of his life living in Burlington and Winooski. He was often thought of as the “Mayor” by many. Michael never met a stranger and, no matter where he went, he knew someone. Whether he was at the Boy’s Club of Burlington or at Roosevelt Park in his younger years, he spent many hours talking about baseball statistics. He was by far the statistical savant in the family. He loved attending wrestling matches at the Memorial Auditorium, races at Catamount, games at Fenway to watch his beloved Red Sox, as well as watching the Lake Monsters closer to home. He was a formidable Bocce opponent, participating in the Special Olympics for many years. Anything sports related, Michael loved. As much as he loved watching his Red Sox, he also enjoyed watching horse racing on television. He kept a great eye on how the UVM hockey teams were doing each season and took great delight in attending games to watch his nieces and nephews play, both at the high school and college level. He loved his family with every fiber of his being. Whether a sibling, niece, nephew, or great niece and nephew, he loved you with everything he had. When he wasn’t busy watching sports or visiting
family, he spent the day calling family and friends. Michael must have had the strongest index finger of anyone on earth! We all treasured his calls and it’s difficult to accept that we won’t receive one last call.

As is life, with great love comes great loss. Michael was predeceased in death by his father at the tender age of six, and later by his mother at the age of 21. After the passing of his mother, he lived with his sister Jackie and her family for almost 30 years. Upon Jackie’s passing, he lived with his sister Bunny for the next 13 years. Following Bunny’s death, Michael lived the next six months with his niece Robin Aruzza and her family. Robin, you were his Guardian Angel at a time Michael needed it most. Michael was able to return home for a period of time, under the care of Karen Badger and her husband until a long-term caregiver was found.

The family would like to extend their love and gratitude to Ashley Prisco, Sandy Baker, and Hilery Kenyon and their families for taking such wonderful care of Michael while he lived with you. You were a true blessing in his life, and in ours, and he knew he was loved by each and ​every one of you. The family would also like to thank the staff at Champlain Community Services who helped support Michael through the years. While there were several CCS employees who worked with Michael throughout the years, we would like to specifically recognize Randy Henson, Eva Campbell, and Martha Blaisedell. The love, care, and respect that you showed Michael will never be forgotten. In addition, we would also like to thank Frank and Camilla Myers, as well as the many Sisters who worked with Michael during his Catechism classes at St. John Vianney. A special thank you to Pete and Colleen Brady who were two of Michael’s Bocce coaches. You all became lifelong friends of Michael’s, and he loved all of you dearly. Lastly, the family would like to extend a heartfelt thank you to his nieces Robin Aruzza and Lori Fitzgerald. The love, commitment, and oversight of Michael during these past six years
has been respected and recognized by everyone in the family.

In addition to his parents, Michael John was predeceased by six of his sisters: Dorothy (Philip) Couture; Doris (Bernard) Dame; Leona (James) Kirby, Patricia (Ralph and Francis) Decarreau; Jacqueline (Ernest, Sr. (Junior)); and Marilyn (Bunny) Conger. He was also predeceased by his niece Judith Wells, his nephew Bruce Billings, and his great nephew Evan Sabine, as well as many lifelong friends.

Michael’s soul was pure, and nothing meant more to him than his family, although a close second was probably his annual birthday party where he took great pride in being the center of attention. His heart was filled with love, his manners were impeccable, and he never had a bad word to say about anyone. He accepted everyone as his friend, and many of those friendships lasted throughout his life. If you were lucky to be a friend or part of his family, then you were lucky enough.

When Michael asked me to write his obituary several years ago, a request he repeated throughout the years, I must be honest and admit that it was never a task that I wanted to accept. To accept his request would be to accept his passing. Our Gentle Giant’s job here is done, and he has joined his family in Heaven. I mentioned to a friend recently, a friend who knew Michael for probably 50 years, that he had earned his Angel’s Wings. My friend reminded me that Michael always had
his wings, but now he gets to use them. I hope I have done justice, representing his life. He gave me a wonderful gift when he requested I write his obituary; it is a gift of a lifetime. Fly high, Michael. May you forever rest in peace.

​Services for Michael John will be held on Saturday, February 26, 2022 at LaVigne Funeral Home, 132 Main Street, Winooski, Vermont. Calling hours are from 9:30am to 11:00am, followed by his service at 11:00am. For those unable to attend Michael’s service in person, a link will be provided on LaVigne’s website so you can participate virtually. Due to restrictions at the cemetery, Michael will be buried at a later date with a Celebration of Life to follow. LaVigne Funeral Home and Cremation Service is in charge of the arrangements.

In lieu of flowers, donations can be made to the Vermont Special Olympics, 16 Gregory Drive #2, South Burlington, VT
05403.