To share your memory on the wall of Michael Cain, sign in using one of the following options:

Michael was known far and wide for his love of family, his students, in addition to numerous athletic pursuits and outdoor adventures. Michael possessed a special talent for writing and delivering poetry and prose to celebrate milestones over the years.

Retired from Bellows Free Academy in St. Albans, VT after 26 years as a Special Education Teacher, Michael was highly skilled at engaging students with emotional and physical challenges. Together, he and Joanne developed the Summit Program which was one of the first public school programs in Vermont to meet the needs of students with emotional/behavioral challenges. Michael always focused on student strengths and abilities, versus their disabilities. He utilized his passion for the outdoors to teach life skills, personal responsibility and social skills to his students. Michael engaged collaboratively with several individuals to create outdoor education programming throughout Northern Vermont and was most proud of the Watershed Program at Missisquoi Valley Union High School.

Michael served in the role of support/case manager for several students from the Grand Isle Supervisory Union, independently he continued to advocate for students and families through Summit Educational Services, PLC which he and Joanne created in 2019.

His passion for the outdoors led to his current roles involving caretaking of the Fairfax Town Forest, St. Albans Town Forest and cross country trails at Hard'Ack Recreation Area. Michael loved building and maintaining the trails in these areas, as well as, engaging the individuals and families he met in the woods.

If you ran into Michael in the woods, you needed to have some time on your hands. He was an unapologetic promoter of community recreation areas and became known as the 'Guardian of the Woods'.
Michael often said, “The adventure bug bit me early and often”. His adventurous spirit brought him to Alaska where he was a fishing boat deckhand and spent time kayaking and ice climbing. He worked with Outward Bound at Hurricane Island, ME, and led mountaineering expeditions with the National Outdoor Leadership School in Nova Scotia. He had endless stories of the mountains he climbed all over the country and the waterways he paddled, holding a special fondness for Martha's Vineyard and the Adirondacks.

Michael was looking forward to winter snow to begin practice with the Cross Country Ski at BFA. Over the years, Michael mentored and touched the hearts of many people in many different ways. He was a one of a kind character who will remain always in our hearts for the compassion, love and skills he has taught us.

Given the current state of the COVID-19 virus in Vermont, a private service will be held for immediate family only. Future celebrations of Michael's life are being developed for his many friends, colleagues and community members and will be announced at a future date. Please visit https://remembered.com/biography/michaelcain to share photos and memories. At this time, the family asks that you gather with your families, tell stories of your remembrances of Michael and “raise a glass” in his honor. In lieu of flowers, donations may be made to the St. Albans Recreation Department.
Read Less

Posted Jan 10, 2021 at 11:00am
Mike and I played racquetball for many years. In all his sports and outdoor activities his athletic skills and enthusiasm made him a formidable competitor and tireless volunteer so more people could enjoy the sports he loved. Mike will be remembered for his dedication to the trail networks in the community and support of cross country skiing. As teacher and mentor to generations of young adults his influence will be sorely missed. I trust his legacy will motivate others to follow on with his work. My deepest condolence to Joanne and the Cain family. My thoughts are with you.
Comment Share
Share via:
DB

Posted Jan 10, 2021 at 12:28am
I can't think of a more appropriate way to honor Mike than to plant a tree in his name. He loved the the mountains, the woods and trails. RIP, love,

Posted Jan 09, 2021 at 11:41am
I met Mike in the 80’s, I was a young ski coach at south Burlington high school. Mike had been coaching skiing and teaching for years.

Mike’s friendliness and accessibility helped to make me feel accepted and included within coaching circles. Mike even offered to Team up and Host a Nordic Ski State meet with my team.

As time moved on, I would run into Mike mostly in the winter on the ski trails and at ski races.

Always greeted with a friendly hello, and genuinely interested in how things were going with the skiers on my team and my life.

About ten years ago, Becky and I asked Mike to help advocate for my sons with the schools. Countless meetings in the school, many great conversations at our kitchen table and frequent stops at his house when we would see his parked truck.

Mike became a mentor to my son Dakota, guiding him towards career opportunities, and counseling him on life choices and consequences.

Mike would often call my son Dakota to get him to help him with yard work and work on the 100 acre woods trails. Mike was a master with using these tasks as a route to conversations and strengthening his relationship with my son.

I’ve grown to rely on Mike’s advice, stopping by his house unexpectedly to talk with him. Mike always welcomed me, listened as he continued with his many ongoing outdoor projects.

Our family misses Mike very much and our hearts go out to Joanne and Mike’s family. 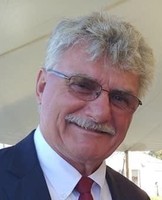 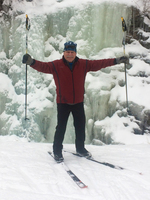