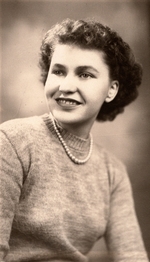 Mary was born in Rutland, VT on November 18th, 1928 to Clayton and Agnes McGuire. She was one of six children- three brothers Bill, Bob and Sonnie, who passed away at a young age, and sisters Anita and Patricia. Her extended family includes Marie Morrow and Eddie Lumnaugh.

Along with raising her children, Mary also enjoyed working. Her first job, which was a wonderful memory, was at VT Maple Sugar Shop where she met her lifelong friend Siemond Kinville. They had many adventures and travels together. Later in life, she went to work at Rice High School and Lake Champlain Transportation where she also made many friends. She also enjoyed traveling to Florida with her sisters, as well as bingo and casino trips with her daughters. Her favorite of all time was having a full house during the holidays and the time spent with her family.

Many thanks to all of the nurses and doctors on Miller 3 for all their special care. Contributions can be made in Mary’s name to the American Heart Association.