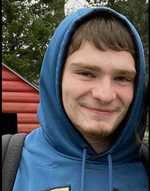 Logan was born in Burlington, Vermont to Larry "Randy" and Michelle (Ratta) Garner on January 16, 2001. He went to Milton Elementary and Fairfield Town School, and graduated from BFA Saint Albans in 2019. Logan had just started a new job he was very excited about and felt like he was finally getting his footing. He had a big heart and was known for helping out anyone whenever he could.

Logan loved sports from a very young age. He played soccer, basketball, and baseball while in school. He even liked to talk sports and always seemed to know the latest player's stats, or scores from the last games. He was a Steelers fan all the way, and had no problem showing his "Steeler's Pride".

He enjoyed cliff jumping, hanging out with his friends and family, and anything that had to do with cars. His dream was to one day own an old corvette.

Logan was preceded in death by his father, Larry "Randy" Garner, his grandfather, Michael C. Ratta, along with great-grandparents, several aunts and uncles, and cousins he loved dearly.

Logan is survived by his loving mother, Michelle Garner, his sister, Lauren Garner, his brothers, Lorenzo Garner and Samuel O'Neal, as well as Michelle's fiancé, Harvey Peck. He also leaves behind his grandmother, Annette Ratta of Milton, grandparents Larry and Judy Garner of North Carolina, his Uncles, Michael Ratta and wife, Bonnie of New Hampshire, and Jeremiah Ratta and wife, Elizabeth of Lincoln, and Robert Allen Garner and wife, Kristin of North Carolina. His Godmothers, Tammy Cusson and Dorothy "Sissy" Ducharme of Colchester. The love of his life, Briana Adams and her daughter Kenzie Robtoy, who Logan loved like his own daughter. Logan also had many other family members and friends,including Ethan Savage and Austin Adams who were special to him.

The Family of Logan wishes to extend their sincere thank you to St. Albans Fire department, Amcare, and Franklin Co Sheriff's department, and of course, a special hero caller.

The family invites everyone to a luncheon following the funeral service at the VFW 6 Maple St. Winooski, Vermont from 3pm – 5pm