To share your memory on the wall of George Courville, sign in using one of the following options:

Burlington - George L. Courville, 93, of Burlington, passed away on Tuesday March 17, 2020. George was born in Burlington, son of the late John Courville and Cecile (Desany) Courville.

George was the b... Read More
George Louis Courville

Burlington - George L. Courville, 93, of Burlington, passed away on Tuesday March 17, 2020. George was born in Burlington, son of the late John Courville and Cecile (Desany) Courville.

George loved spending time with his family. He also learned to paint after he retired, and became an accomplished artist. Due to COVID-19 public health guidance, a celebration of life will take place when it is safe to do so.

We encourage you to share your most beloved memories of George here, so that the family and other loved ones can always see it. You can upload cherished photographs, or share your favorite stories, and can even comment on those shared by others.

Plant a Tree in Memory of George
Plant a tree 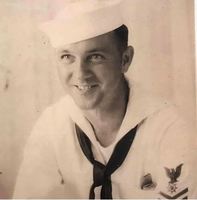