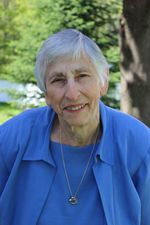 Colchester - It is with great sadness that we announce the passing of Frances M. (Brigante) Bosley. She died on April 1st, 2021 at home, as was her wish, with her family by her side.

Frances was born on October 3, 1931 and lived in Colchester her entire life. She graduated from Winooski High School in 1949 and worked on the family vegetable farm until she married. On October 20, 1962 she married her beloved husband, Raymond C. Bosley, Sr. He predeceased her in 1989. She was a devoted and loving wife, mother, grandmother and great-grandmother.

Frances is survived by her three children, Kathy Rouleau and husband, Mike, Raymond Bosley, Jr., and Patricia Ashline and husband George. She was most delighted to be Grandma B. to her 5 grandchildren, Benjamin Rouleau and his wife, Becca, Meghan Bosley, Rebecca Frances Rouleau, Raymond Bosley, III, and Sarah Rouleau. She was thrilled to be great-grandmother (GG) to Josie, Ariella and Levi Rouleau.

She was the oldest sister to Cathy Halnon, Cosimo Brigante, John Brigante, Peter & wife Marge Brigante and Frank & wife Dottie Brigante. She is also survived by her siblings-in-law Shirley Delisle, Joan Bosley, Marion Bosley and Tom & Sally Bosley, many nieces and nephews, as well as her lifelong friends Ruth Nolan and Claudette Bissonnette.

The family would like to thank the nurses at UVM Home Health and Hospice, especially Laura, for the excellent care Frances received over the last year.

As was her request, there will be no visiting hours. A Mass of Christian Burial will be celebrated on Saturday, April 10th, 2021 at 10 AM at The Chapel of St. Michael the Archangel at Saint Michael's College. Burial will be private and at the convenience of the family.

In lieu of flowers, donations can be made to the American Red Cross or the McClure Miller Respite House.

Arrangements are under the care of LaVigne Funeral Home and Cremation Service.