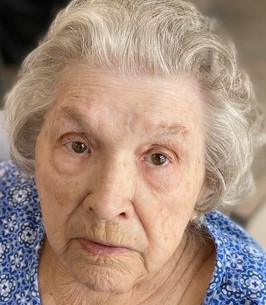 She married Louis Guy Lesage, the love of her life, on April 14, 1951 in St. Stephen’s Church in Winooski, VT. Together they built their lives in Winooski, and were parishioners at St. Francis Xavier Church. Their union combined two large French-Canadian families (25 siblings!)

Emily and Louis were both hard workers. They set out on a new journey in 1962, purchasing Archambault Furniture Store in Winooski. Louis passed away in 1974, but Emily continued to run the family business until 1982.

A fierce matriarch, Mom loved to defend the underdog, taking many under her wings. She was generous to a fault, and immensely loyal. Her hobbies included working on jigsaw puzzles, sewing, ceramics, bowling, and skating. She loved her gardens and the annual load of top soil. For many years there was also a backyard skating rink and baseball field, which were both enjoyed by all the neighborhood children.

Her love of people allowed her to stand apart from others, always willing to lend a hand even at 91 years old.

Besides her husband Louis, Emily was also predeceased by her son Edward (2016) as well as brothers, sisters and several extended family members.

Emily is also survived by many great grandchildren, who include David, Brian, Emma, Noah, Bryan, Gordon, Paisley, Camden, Grady, Keegan, Connor, Addysson, Carter, Riddick and Axel. She is also survived by her dear sisters Florence Couture and Lorraine Martei, as well as in-laws Shirley Lesage, Cecile (Jerry) West, and Andre (Rocheline) Lesage, as well as many nieces and nephews.

Thank you to her friends and neighbors at Whitcomb Woods, especially her niece Nancy, friends Yvette, and Sister Agatha, as well as Dorothy Dow and to the special caretakers at Birchwood Terrace in Burlington as well as Dr. Peter Gunther.

At Emily’s request there will be no visitation, however a Mass of Christian Burial will be held at St. Francis Xavier Church in Winooski on Monday, June 20th at 11:30am.

In lieu of flowers, donations may be made in Emily’s memory to St. Jude’s (for childhood cancer research) or to the American Alzheimer’s Association. Arrangements are in the care of LaVigne Funeral Home and Cremation Service.