To share your memory on the wall of Donald Baker, sign in using one of the following options:

Burlington - Donald E. Baker, 85, lifelong resident of Burlington, passed away peacefully on Tuesday, October 6, 2020, in University of Vermont Medical Center. Donald was born in Burlington, Vermont on November 23, 1935, the son of Homer and Evelyn (Root) Baker. He served proudly in the United States Navy on the USS Stribling DD-867 from December 28, 1954 - December 14, 1961, when he was honorably discharged.

Donald was married at the Cathedral of the Immaculate Conception in Burlington, on September 1, 1962, to Pauline (Hebert) Baker, whom he adored. He will be remembered for his fun, loving sense of humor. He took great pride in making everyone around him laugh. After attending "Clown College" in the 1990's he became popularly known as "Peppy" the clown. He enjoyed participating in state wide, community events and events hosted and sponsored by the Telephone Pioneers of America. Clowning and making people laugh, were his passion. He also enjoyed spending time with his children and grandchildren. Donald is survived by his wife of 58 years, Pauline; his children, Dr. Laurie A. Baker-Malungu, husband, Dr. Henry G.B. Malungu of Macao, China, Linda L. Buker, husband, Larry A. Buker of Essex. Jeffrey S. Baker of Burlington, VT, Michelle M. Guertin and fiance, David M. Fernandez, of Port Orange, FL; grandchildren, Phillip E. Ploof and girlfriend, Ariel Munson, of Grand Isle, VT, Tazira M. Malungu of Edmond, OK, Ryan J. Ploof of St. Albans, VT, Martharoot N. Malungu of Brampton, Ontario, Canada, Musbanani K. Malungu of Macao, China, Kacey L. Guertin and Hunter D. Guertin, both of Port Orange, FL; great-grandchild (due) 2021, brother, Robert and sister-in-law, Yvonne Baker; sister-in-law, Nancy Baker, sister-in-law, Barbara Baker, brother-in-law, Raymond Hebert and many nieces, and nephews. He was predeceased by his parents; sisters Elaine Polombi, Joyce Beach and brothers, Homer Baker, Jr., Bernard Baker and Richard Baker.

A Mass of Christian Burial will be celebrated on Wednesday, October 14, 2020 at 10 a.m., in the Cathedral of St. Joseph's in Burlington. Interment will follow at Mount Calvary Cemetery in Burlington. Arrangements are under the care of LaVigne Funeral Home, 132 Main St. in Winooski.
Read Less

We encourage you to share your most beloved memories of Donald here, so that the family and other loved ones can always see it. You can upload cherished photographs, or share your favorite stories, and can even comment on those shared by others. 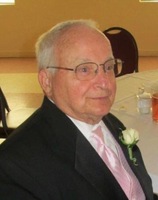