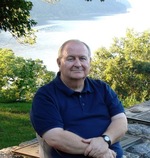 He graduated from Rice Memorial High School in 1961 and St Michael's College in 1965.

Tony was proud of his military service as a B52 pilot in the United States Air Force and over the years remained close to the fellow pilots in his training class (67E) at Moody Air Force Base, GA.

In his youth, he was an accomplished athlete playing baseball and football. Throughout his life, he enjoyed hunting and fishing with family members, and later in life he enjoyed golf, sailing and travel, especially a memorable trip to Paris. Together, Tony and Sue enjoyed watching sports- including PGA golf and the New England Patriots. Tony was also an avid reader, a history buff, and in recent years, a poet.

He was a founder of Villanti and Sons Printers with his father and brothers in 1971, and was employed in the family business for 37 years. He served on the Board of Directors for the Howard Center for ten years (1992-2002), including three as President.

Tony will also be missed by two special sisters-in-law, Brenda Farrington and Karen Villanti; nieces, Melissa Villanti-DeSousa and her husband John, and Andrea Villanti and her husband Christopher Brady; nephew Joshua Villanti and his wife Jess of Colchester, VT; several cherished cousins, nieces and nephews from the Villanti, Lyons and Audette families; and many friends in VT and Naples, FL. He was predeceased by his parents, his beloved brothers, Michael and James, and sister-in-law Coleen Zelonis Villanti.

Tony's family would like to extend special thanks to Drs. Peter Gunther, Janet Kirwan, and Peter Van Buren for their care and support. We would also like to thank the wonderful staff at the Outpatient Dialysis Unit at Joy Drive.

Due to COVID, Tony's funeral service and burial will be private. In lieu of flowers, donations in Tony's memory can be made to the Vermont Foodbank, 33 Parker Rd., Barre, VT 05641 or the Howard Center, 208 Flynn Ave., Suite 3J, Burlington, VT 05401.

Arrangements are under the care of LaVigne Funeral Home and Cremation Service.