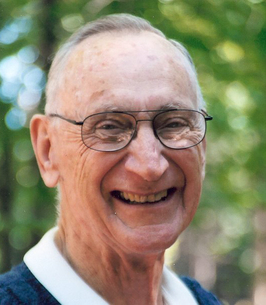 The Reverend Anthony Wayne Schwab, beloved husband, father, uncle, grandfather, great grandfather, and promoter of love and justice, passed away on May 19, 2022 at the age of 93. The third son of James Edward Schwab, a real estate developer, and his wife, Mary Elizabeth Van Fossen Schwab, who taught dramatic arts at Georgetown University, Wayne was born October 20, 1928 and raised in Washington, DC.

Wayne graduated Phi Beta Kappa from Lehigh University in 1950 with a B.A. in English; he was president of both Alpha Sigma Phi and the Canterbury Club, and served in the ROTC. Originally an engineering major, he switched to English and confirmed his desire to become a minister, something he had contemplated as early as age 14. He earned a Master of Divinity degree from the Virginia Theological Seminary in 1953.

Wayne was advised to work with the public in a commercial capacity before becoming a parish priest, so he became a Fuller Brush salesman. He met his first beloved wife, Elizabeth “Betty” Parsons when he knocked on her door, and then again at their mutual church, St. Paul’s Rock Creek Episcopal Church, where he was assistant rector. Together they updated church school curricula as part of the Seabury Series. They married in 1954 and added four adored children to their family over the years.

Wayne was ordained to the priesthood in June 1955, and became rector of St. Paul’s Episcopal Church in Montvale, New Jersey in 1956. During the turbulent civil rights movement, he hired the church’s first black organist and choir master in a community not known for its diversity. He also participated in the March for Jobs and Freedom. Wayne ultimately grew St. Paul’s membership to the point where a larger church and education facility was built nearby, and he mentored three assistant ministers, one of whom became Dean of the National Cathedral in Washington, D.C. His Sunday sermons reflected America’s changing times, and included references to current arts and events, such as the rock opera “Jesus Christ Superstar.” He also arranged for the specially commissioned rock cantata called “A Spark of Faith.”

In 1968, Wayne was a key leader in organizing the Pascack Valley Center, along with four other churches (Catholic, Lutheran, Methodist, and United) and a Jewish temple, dedicated to the “improvement of human life.” The center organized public leaders, established both youth guidance councils and clinics for the elderly.

Wayne was a key participant in many pivotal changes in American theology. In the 1960s, he attended the World Council of Churches in Zurich, Switzerland as a US delegate. In 1975, Wayne was appointed the first Officer in Evangelism for The Episcopal Church in the United States, serving under the Presiding Bishop. He was quoted in the New York Times as saying, “We, clergy and lay, are all missionaries preaching the gospel of Jesus Christ by how we conduct ourselves in everyday living.” This position led him into every diocese stateside and seven countries in Central and South America, Europe, and Asia to assist leaders in spreading the Gospel and being an advocate for love and justice. Following the General Convention of the Episcopal Church in 1988, Wayne was heavily involved in the church catechumenal process.

After retiring in 1993, Wayne founded the non-profit organization, Member Mission Network, Inc. His goal was to provide churches with the tools to help their members make the world more loving and more just. He found ways to contribute positively to every church he attended. When he and Betty moved to Essex, NY, he served as a Sunday School teacher at St. John’s Episcopal Church, and then as their Interim Rector.

Wayne was a prolific author. During his tenure at the national church office, Wayne wrote, co-authored, contributed to, and/or edited numerous publications, such as An Anglican Evangelism; The Catechumenal Process, Adult Initiation & Formation for Christian Life and Ministry, A Resource for Dioceses and Congregations; Guidebooks for Evangelism, Renewal and Church Growth; and E Share, A Notebook for the Decade of Evangelism, 1990-2000, in the Episcopal Church In “retirement,” Wayne established a website sharing stories and his own tips for daily living. He also authored three books: When the Members are the Missionaries (2002), a companion workbook with his daughter Elizabeth Hall called Living the Gospel (2010), and How to Live your Faith, published by Virginia Theological Seminary in 2022. Religion was the family business. So, in addition to colleagues, Wayne often involved family members as co-authors, editors and subjects of his sermons.

Wayne was nearly as committed a Democrat as he was a man of faith, writing numerous Letters to the Editor in his retirement regarding social and political issues. A lifelong Boy Scout, he loved to sail, take his children camping and hiking, travel, and make real connections with people. He was a passionate believer in the power and duty of every individual to make the world more loving and just, and never stopped trying to help make this a reality. He was fond of signing letters and emails with “Peace and Power.”

Wayne’s first wife, Betty, passed away February 28, 2008, at the age of 87. In 2010, he wed his second beloved wife, Renate Parke, and moved from New York to Vermont. Ever the ecumenical, he then joined Renate at the United Church of Hinesburg, and the men’s group at Trinity Episcopal Church in Shelburne.

We ask that donations be sent to the Virginia Theological Seminary (https://give.vts.edu/). Letters of condolence may be sent to Renate Parke at PO Box 294, Hinesburg, VT 05461. A memorial service will be held at some time in the future.